21 Folksongs inspired by the magical Westcoast of Ireland – NEW

For the last 25 Years the german Singer&Songwriter Jens Eloas Lachenmayr Alias Eloas Mín Barden is traveling the ancient  roots of all the celtic places around Europe and ended up at the Westcoast of Ireland, where he writes most of his songs, infuenced by the vastness of the Atlantic few, who is clearing and emptying the mind, to make space for new Inspirations.

For over 20 Years he lived here Parttimes of the Year and bringing his music on stages around Germany, Switzerland and Austria. But for the last couple of Years he has his permanent Residence at Beara Peninsula in the South West of Ireland and is also touring with his music around Ireland.  As he was giving to benefical Concerts for the new Care-Center of Dzogchen Beara, where People, who are  facing Death are invited to do their last Step in Respect and Peace, the Irish Times titeled himas the „German Luca Bloom“ and gave his Task the Headline: „It`s Payback-Time“. This was ment in that sence, that he got so much Inspiration from this Part of Ireland, – almost 80 Songs where written here – that he is paying now back with music.  Eloas Mín Barden  – a modern Bard with Songs written in german and english is playing his concerts together with other Folk-Musicans from around Europe. And the People like the sound of his german songs, because they say there is a slide Similarity between the Sound of Gaelic and german Language. The great Godess of Corona made him work intense on his new Album „Nicht von dieser Welt“ (Not from this World) and in the same time he finished a couple of english songs for the new Album „The Song of the Bard“.  We highly will recommend his work, and we wish you a lot of Enjoyment by listening to his music. 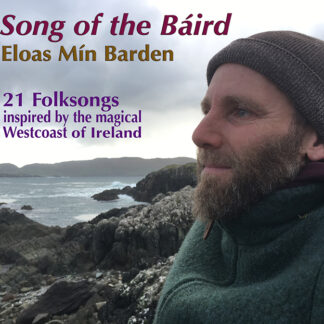 Du siehst: Song of the Báird – 21 Folksongs inspired by the magical Westcoast of Ireland – MP3 10,00 €
In den Warenkorb